Geelong forward Tom Hawkins has insisted that the Cats do not fear the MCG ahead of their cut-throat semi-final at the venue against West Coast on Friday night. 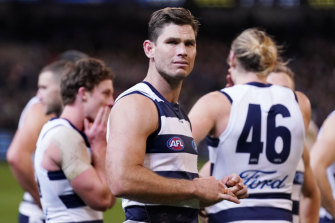 Geelong’s comfort levels at the MCG became a huge talking point leading into the finals, with coach Chris Scott having raised at press conferences what he deemed to be the unfair situation of his team not getting to play a final at Kardinia Park despite finishing on top of the ladder.

While Geelong have won four of five games there in the home-and-away season, they lost their qualifying final to Collingwood by 10 points.

But Hawkins said he didn’t believe there were too many differences between the ground dimensions of the MCG and Kardinia Park.